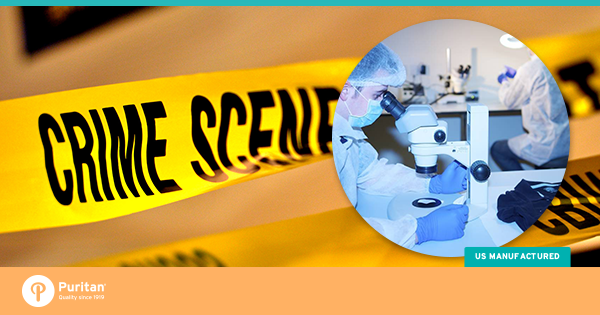 DNA evidence in criminal law cases can be a life-changing tool to secure convictions or exonerate innocent suspects.

As long as the DNA is handled and tested properly, that is.

Because very small DNA samples can be used as evidence, investigators and laboratory personnel must be extremely careful about contamination issues when identifying, collecting, and preserving samples. If contamination occurs, the evidence might never make it to the courtroom.

What is DNA Contamination?

How Does DNA Evidence Contamination Happen?

DNA evidence is contaminated when DNA from an outside source (exogenous DNA) gets mixed with DNA relevant to the case. It can happen in a variety of ways, from someone sneezing or coughing over the evidence, to samples getting mixed during sequencing.

The Trouble with Touch DNA Contamination

Touch DNA, the invisible cells humans transfer to everything we contact, is currently being evaluated for its potential to contaminate crime scene evidence. Though valued for its ability to derive evidence where visible DNA (such as blood, semen, hair, or saliva) can't be found, some researchers are challenging the validity of that evidence because the microscopic genetic markers are transferred so easily.

In a study entitled Could Secondary DNA Transfer Falsely Place Someone at the Scene of a Crime?, University of Indianapolis researchers performed experiments to test the sensitivity of Touch DNA transfers. Person A held a handshake with Person B for two minutes, then handled a knife.

The DNA profile of the Person B, who never touched the weapon, was identified on the swab of the weapon handle in 85 percent of the samples. In one-fifth of those experiments, the person who had never directly touched the knife was identified as the main or only contributor of the DNA on the handle, according to the study.

How to Collect Crime Scene Evidence and Prevent Contamination

It may be impossible to completely eliminate crime scene contamination. And Crime Scene Officers are not the only ones to blame. When first responders arrive at a scene, their responsibility is to the victim(s) and not the preservation of evidence. What happens when a drop of sweat falls from an EMT's brow? There's simply no way to account for all the possibilities.

But precautions can and should be taken. The National Criminal Justice Reference Service (NCJRS) outlines the following tips for preventing evidence contamination:

The Best Way to Store and Transport DNA Evidence

As noted by the NCJRS, DNA evidence must be kept dry and at room temperature. To keep it dry, place evidence in paper bags or envelopes instead of plastic bags because plastic bags retain compromising moisture. Direct sunlight and heat can also damage biological evidence. Once properly stored, the evidence container should be sealed and properly labeled. And all evidence handlers must record the chain of custody.

Allelic Ladders and Life in the Lab

There are three main categories of exogenous DNA that affect DNA-typing labs. We'll take a look at what they are and what analysts can do about identifying contamination.

Can analysts differentiate between DNA contamination of samples, and true mixtures of DNA profiles? Yes, but it's extremely difficult. The best way for labs to deal with this issue is with preventative measures. Strict protocols and safeguards, as well as proficiency tests for the staff are a good place to start.

Though it may seem like there are a lot of ways DNA evidence can be contaminated, there are plenty of ways to preserve it. Preparation and attention to detail are key to handling DNA—which could be key to a criminal law case.