How to Swab for Touch DNA Evidence

Touch DNA, also known as Trace DNA or Low Copy Number DNA, is an advanced and fairly new crime scene investigation technique used to collect and analyze microscopic transfer cells left behind during the commission of a crime.

But why is touch DNA so important?

How Touch DNA Works & Why it Matters

Law enforcement professionals call this technology a breakthrough. First, it allows for the collection of evidence where there is a lack of visible DNA (such as blood, semen, hair, or saliva). Second, it can be used on fingerprints that are too smudged or incomplete for fingerprint analysis. And third, prosecutors of many cold cases with samples too small or degraded to prove useful are now re-submitting evidence to labs for Touch DNA analysis.

The process of extracting Touch DNA for forensic analysis involves swabbing, taping, or scraping for trace amounts of epithelial cell-tissue from surfaces such as doorknobs, countertops, windows – and even clothing and food.

This Touch DNA is then amplified using polymerase chain reaction technology to create identical copies that are large enough for proper analysis.

According to Ryan Forensic DNA Consulting, “the amount of DNA needed to yield a full DNA profile with most commercially available amplification kits is approximately 1 nanogram (ng) of DNA and partial profiles can be obtained with even less starting material."

That amounts to about 5-30 skin cells. No wonder police departments across the country are embracing Touch DNA.

Of course, if you want Touch DNA evidence to work for you, it's essential you adhere to specimen collection best practices to avoid compromising a sample.

How to Swab for Touch DNA

One of the main benefits of Touch DNA technology is that it is so sensitive as to be able to place a suspect at the scene of a crime with just a few skin cells extracted from a forensic swab or scraping. Unfortunately, this is also one of the potential drawbacks. Because the tests are so sensitive, crime scene investigators must use care to avoid contamination.

How to Avoid Contamination of Touch DNA

A great first step is to use forensics products manufactured in an environment that complies with ISO 18385:2016 This is the internationally recognized gold standard for environmental controls that minimize the risk of human DNA contamination in the production of forensics products.

Other applications for Touch DNA include the following. 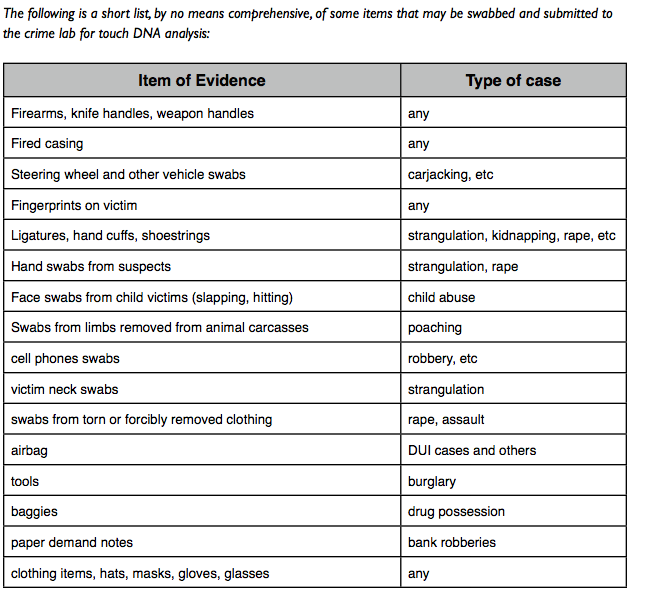 For more information on swabbing tools and procedures relating to Touch DNA collection, please don’t hesitate to contact one of our knowledgeable product specialists today.

Ryan, Suzanna, MS. Touch DNA. What is it? Where is it? How much can be found? And, how can it impact my case? A question and answer guide to all things touch DNA. Ryan Forensic DNA Consulting. Originally Retrieved September 3, 2014. Retrieved from new link on February 21, 2019 from: http://ryanforensicdna.com/touchdna/

Touch DNA: From the Crime Scene to the Crime Laboratory. Forensic Magazine. Retrieved September 3, 2014 from: http://www.forensicmag.com/articles/2013/04/touch-dna-crime-scene-crime-laboratory

How to Collect a Buccal Swab Sample for Forensic Analysis [VIDEO]